One thing that I've always loved was those 60's Hammer Horror films. Hammer was a british company that did they best Vampire movies and others staring some of the best in the game like Christopher Lee, Vincent Price and more. If your up on your horror genre then you know that these flix are Cult Classics! But one thing that they've always had was some of the best chicks for the job in them as well. If you a fan of real horror flix, not this new shit then this is for you.

Hammer Glamour: A Glorious Tribute to the Queens of Hammer Horror.

In the ’50s and ’60s, British movie studio Hammer got over with a prolific franchise of lush, bloody monster movies (once referred to as "tit and fang" movies). This is less about the "fang" and more about the "tit." Not that we have a problem with that. 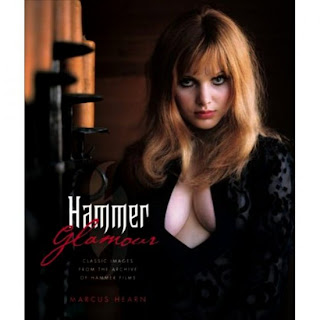 Posted by Skeme Richards at 9:22 AM

HAMMER HOUSE of HORROR is cult viewing. "The Two Faces Of Evil" scared the shit out of me as a kid in 1980 when it was first shown. I still can't drive down a country lane in the rain!!

If there's anyone that I knew would understand those classic Hammer films would be you KD!!