Ok you might think I'm crazy for this one but it's based strictly off of nostalgic factor and I don't really expect too many people to get it. I'm not a fan of today's electronic generation of music but I have an affection for the sounds of yesterday with alot of the early composers making video game music as well as film compositions. My first computer was a Commodore Vic 20 in 1980, followed by the Commodore 64 in 1983, before the Apple brand became famous the Commodore was the best machine on the market and the games were all top notch for it's time. But one of the things that made these games so great was the music that was composed for them and these tunes have stuck in my head ever since.

Well it looks like someone has gathered some of these tracks and are releasing them on a 2LP vinyl set called "Sid Chip Sounds" The Music of The Commodore 64. 19 original pieces of music have been remastered for this release on gatefold double vinyl. Revolutionary composers such as Martin Galway, Rob Hubbard, David Whittaker and Ben Daglish rose to prominence during the 80s for their technology defying masterpieces whose sounds ranging from simple clicks and beeps to complex musical extravaganzas. This isn't for everyone nor is it something that I would spin in the club but it is something for me to geek out to in the crib which is what I will be doing after I write this post, geeking out playing my old C64. 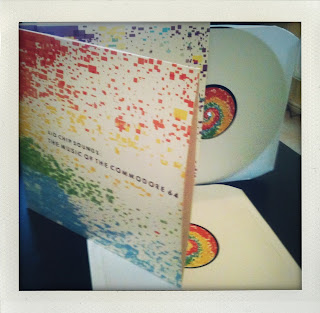 Posted by Skeme Richards at 8:01 PM

Rob Hubbard was an effin' genius on the C64 music. His themes for Crazy Comets and Commando still bring back so many memories. Skeme I posted up some of his space age beats here....

Ahhh Kid Dyno! You always come with the goodness, checking that link out now!

my friend used to have a commodore 64, used to go around this house to play "bolderdash" loved that game, my mum got me an oric atmos...was lame computer! most of my "trials of life" ep was initially done infancy stage on my commodore amiga. still got that tape of beats from 1990. will have to put it up on the web. peace sigher the gutter snype

Word. Thanks for the comment, definitely let me know when you put that beat tape up!. But yeah I loved the 64 and once the Amiga 500 came out I was on that too, great machines.