Tonight I'll be attending the screening of 'Shake The Dust', a documentary executive produced by Nasir 'Nas' Jones.  The incredible film takes the viewer around the globe to Yemen, Uganda, Columbia and Cambodia exploring the interconnectedness of Hip Hop culture.  In addition to the screening, I'll be providing the soundtrack on the 1's and 2's along with David Adams before and after  with a few performances and a guest appearance by Philly / Graff legend and godfather, Cornbread.

If you haven't done so yet, then cop your tickets here cineSPEAK.brownpapertickets.com 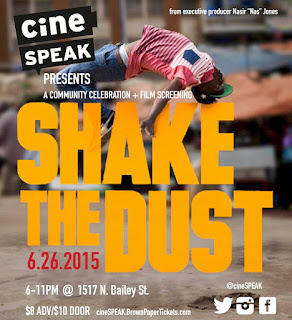 Posted by Skeme Richards at 9:44 AM