Still On That Burger Quest

With already being in Europe for the last three weeks you would've thought that I have had my fair share of burgers but surprisingly not.  But last night that all changed after trying a new spot that I had never been to before here in Amsterdam called Cannibale Royale which is listed in the top burgers spots to trying here in the Dam.  After reading all of the comments I have to say that it definitely lived up to its ratings and very well might now be in my top 5 burgers in the world that I've tried so far.  The menu in general was on point serving up a nice selection from burgers to ribs with nice local beers on tap. 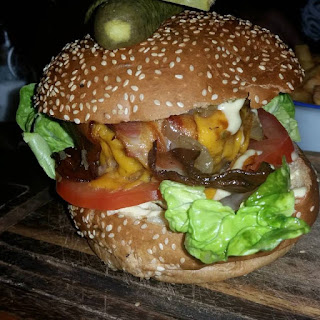 Posted by Skeme Richards at 7:52 AM