Ok, I'm in the mood to pull out some of my old King Conan comics! If you've been reading my blog then you know Frank Frazetta is one of my favorite artists. His Conan The Destroy piece just sold for a cool 1.5 Mil! 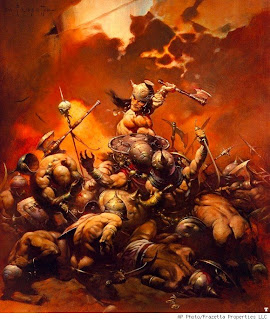 Fantasy art from the 1970s doesn't generally fare too well in the art world but the recent sale of a 1971 painting by famed artist Frank Frazetta might change that. Frazetta's "Conan the Destroyer" has sold for $1.5 million, two months after the Pennsylvania artist's death. A private collector bought the painting from a family trust. It is believed to be the highest price ever paid for a Frazetta. Frazetta's illustrations of Conan the Barbarian, Tarzan, flying dragons and a whole host of warriors, wizards and sorceresses have appeared on countless comic books, album covers and movie posters. In the last few years his children have been fighting over his estate, estimated to be worth tens of millions of dollars. The family feud made news last year when Frank Frazetta Jr. used a backhoe to try to break into the artist's museum in the Pocono Mountains and liberate some of the art. The Frazetta Museum sells prints of many of the artist's works for $10 each.
Posted by Skeme Richards at 8:12 PM

Wow. 1.5 million. We could release the rest of the Shaw Brothers library with that and still have money left over for burgers and pizza.