Lately it seems like rare comic books might just be the best investment of all. A Batman comic bought for $1,200 could sell for over $400,000 in an August 5-7 auction at Heritage Auction Galleries. The CGC Certified VF-7.5 Detective #27 was bought by college student in Hawaii in 1974 at a bookstore. He later tracked down the woman who had sold the comic to the bookstore and found out that she had bought it off a local newsstand in 1939, before Hawaii was even a state. The comic book is in an unrestored condition and has had just these two owners.

Earlier this year, Heritage sold another comic book documenting Batman's first appearance for $1,075,000. That blockbuster price brought forward the anonymous consignor of this most recent version. He plans to use the proceeds to help pay for his son's college education. "We think this could become just the second comic to top $400,000 at auction," said Ed Jaster, Vice President of Heritage Auctions. 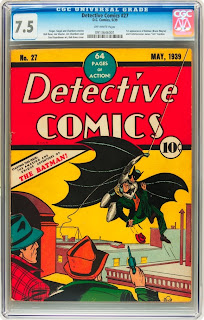 Posted by Skeme Richards at 4:49 PM

I've held an Action Comics #1 in my hands before. It was my grandfather's. It wasn't in the best condition, but the cover was still on it. The back cover was torn. I think my uncle has it now.

I would love to be sitting on a few of those!

Damn, Skeme, these fu**in' spammers won't leave this post be! Like some people aint got nothing better to do. Incidentally, I got Pam Grier's autobiography in the mail today. Gonna dive into it later this evening!