Keep it movin along! (c)Leaders of the new school.

Aight time to get 2010 rolling! 2009 was a great year, alot of travels, noise being made and it don't stop! The colabo with the film "Black Dynamite" brought out two very successful Hot Peas and Butta parties, HPB NY & worldwide is going strong with my man Amir (be on deck for our James Brown Tribute party on Jan. 8th in New York). HPB also will be turning 2 years old in a few months and of course we'll be celebrating something special for the occassion! We'll be hitting Pittsburg to getdown with the finest record dude out there Jay Malls for a HP&B night, the following week we bring it home to NYC with special guest and Seattle's freshest, Mr. Supreme aka Supreme La Rock. The following week we're keeping under wraps, this one is gonna be bananas!! From there we take it back to Seattle to do it all again on Supremes turf.

But but but wait it gets worse! (c)Onyx

I wanted to keep this quiet until the time came around but things get out and who wants to be late informing the world with their own project? In 2010 HPB colabs with tastemaker DJ Junior and his Record Breakin' label to release a limited edition 7" featuring the Hot Peas and Butta band!! Yup thats right, we don't just spin records we make records too. And in true HP&B fashion it will be more than just a funky 7" but more on that later.

January also marks the relaunch of the $2 Soul Show! Alot of people have been asking so I'm delivering. After a show hiatus once again its on! 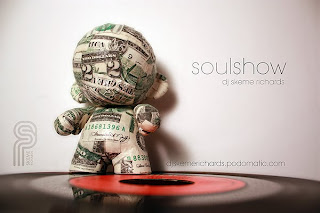 For all my european peoples I'll be back on your side of the globe! January 13th Switzerland here I come! I'll post the flyer up later this weekend.

I dont want to get ahead of myself but theres alot going, so I won't hit you with all the info a one shot.
Posted by Skeme Richards at 6:27 AM