She's still Hot as ever!

You know I love that Hot Peas and Butta shit and Pam Grier is the first lady of the club! She's on a tour to promote her new book "Foxy". 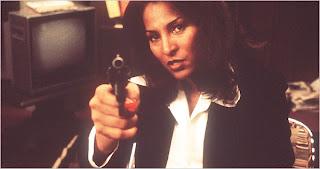 In her new memoir, “Foxy: My Life in Three Acts” (Hachette Book Group), Ms. Grier, 60, revisits a career that took off in the early 1970s when she became blaxploitation cinema’s first female action hero. She sprang to prominence again in Quentin Tarantino’s 1997 film, “Jackie Brown,” and she popped up in the 21st century in the groundbreaking Showtime television series “The L Word,” about the lives of lesbians.

“Foxy,” however, reveals a darker personal life, including, for the first time, the details of her sexual assault at 6. It also recounts the diagnosis of cervical cancer Ms. Grier received in her late 30s and the untimely deaths and suicides of family members and friends. There is space, too, for her romances with Kareem Abdul-Jabbar (who wanted her to convert to Islam), Freddie Prinze (who battled drugs and wanted her to have his baby) and Richard Pryor (who thought she could help save him from drugs).

Why tell her story now? “I’ve had mentors who know of my legacy and family history, along with my career in surviving and falling, crawling and learning, and being very, very open and curious,” she explained. “I said, ‘If I do it, I want it to be a work of lessons learned that I can share with others.’ You seek help. You seek friendship.”

Ms. Grier, who wrote “Foxy” with Andrea Cagan, was sitting in an Upper East Side hotel suite, far from the little Colorado ranch she shares with three dogs and four horses. Her face was unlined, her body curvy rather than Hollywood thin. She laughed easily and often, despite sharing sometimes harrowing details of her life.

She grew up in Colorado, the daughter of an Air Force mechanic and a nurse. It was an era of racial segregation; the family (including two siblings) lived abroad for extended stays, but Ms. Grier considers her “rural sensibility” important to who she is. She said she was taught by her family to “sleep in a tent at night in the rain and go fish for your food in the morning.”

Life was forever altered when, left unsupervised at an aunt’s home, she was raped by two boys. After that she describes a lonely, traumatized childhood.

“I was very quiet,” Ms. Grier recalled, and she stuttered when she did talk. As a young woman, she was the victim of a date rape, she wrote, which led to years in which she tried to play down her prettiness.

“My life is probably more interesting and dangerous than some of the movies I’ve done,” she said.

She came by her steel the hard way, Ms. Grier said. And she referred to some of her biggest 1970s hits to explain how. “My aunt was Foxy Brown, and my mom was Coffy, and we were constantly struggling against disrespect,” she said.

In “Coffy” (1973) she played a nurse who turned to vigilante justice to avenge her little sister’s drug addiction. In “Foxy Brown” (1974) she fought against drugs and other ills.

And it took Ms. Grier’s winning combination of sex, sass and talent to pull it off, said Warrington Hudlin, a producer and the president of the Black Filmmaker Foundation. “She exists in the American imagination in a way that is permanent,” Mr. Hudlin said. “She represents a self-reliant, dynamic female figure that doesn’t have to forgo femininity for potency, for militant power.”

While the story lines were outlandish, Ms. Grier said some of her early films had their roots in the truth of urban life in that era.

“We had won so many aspects of civil rights, but we didn’t have a large enough community to lose people to gun battles and drugs,” she said. “We had to show we had a positive community, too, which was something that didn’t get on the news.”

When it comes to more personal topics, like men, Ms. Grier also aims to convey a lesson: a woman needs to love herself more than she loves a relationship.

“At some point you have to realize you will be walking away from someone you do love,” she said, describing her failed relationships. “But out of love for yourself, O.K.?” While she has never married or had children, Ms. Grier said she still fantasized about her dream wedding.

After years with few big roles, her fortunes were revived by Mr. Tarantino, an avowed fan of blaxploitation and other less-than-exalted movie genres. He took her talent global with “Jackie Brown,” an adaptation of an Elmore Leonard novel that was tailored for Ms. Grier and includes references to her earlier work.

The film showcased her acting chops and cast her in a more serious light in the film industry. “I owe him at least one child,” she said of her gratitude to Mr. Tarantino.

This year Ms. Grier joined the cast of “Smallville,” the CW science-fiction series, where she plays the brilliant covert agent Amanda Waller.

So now her fans are tweens as well as their grandparents, Ms. Grier said, and they pay attention to what she does. When she played the straight musician and club owner Kit Porter (half-sister of Bette, a lesbian) on “The L Word,” people stopped her in the street to say she helped them connect to gay family members and friends.

Now in the midst of a book tour, Ms. Grier said she felt good, and grateful. Her cancer is in remission. She is shooting a film with Tom Hanks and Julia Roberts.

Staying the course goes back to the book she calls her bible in “Foxy”: “An Actor Prepares” by Constantin Stanislavski.

Great post, Skeme! I got this on order, myself. I can't wait to read it.

Venom your the man. Always up on the finer nostalgic things in life. Definitely think this will be a great read.