All It Takes Is One Sheet

As a collector of many things like toys, records, comic books and everything nostalgic I spread my money across the board to indulge in buying the things that keep me young. While most fellow DJ's spend tons of money on records off the wall (which I also do) I still believe that art is always the better investment. Of course bragging to fellow diggers about a record you just scored which eventually makes it's way hidden in a dusty crate is great but having a piece of art framed, positioned and displayed on your wall reminds you of what you spent your hard earned dollar on. My comic book collection is just as deep as my crates but seeing this makes me want to pour my money in extra heavy to retire on it later.

Original comic art from key 1980s-era comics has been hot for several years. It’s considered an important, peak era for comics (think Watchmen, Dark Knight Returns, etc) and the people who grew up reading comics during that time are entering their prime earning years. It is no longer uncommon for even panel pages from the most important material of this era to push into the 5-figure range — or beyond. Bleeding Cool told you just last year about a Dave Gibbons Watchmen page 1 going for $33,460, and the stunning world-record result of $448,125 for a Frank Miller splash page from Dark Knight Returns followed a few months later.

And while art from the classic early-1980s X-Men run has long demanded strong prices as well, today’s result has surprised even seasoned observers: A single page from Uncanny X-Men #137, the classic Death of Phoenix issue by Chris Claremont, John Byrne, and Terry Austin has just hammered for $65,725 at Heritage Auctions. 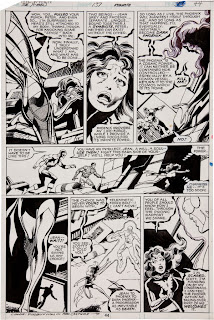 Posted by Skeme Richards at 3:40 PM