One of the things that I love about traveling is returning home to see what the postman has delivered in my absence. Usually there are boxes stacked by the door of records, toys, bills, magazines and other goodies, just like Christmas. When I arrived home from Switzerland there was one particular package that stood out the most which of course was the one sitting on top. After opening to my surprise was a copy of the limited edition Slice of Spice x Lord Finesse Flexi Disc!!

For those that have been following the trails of Slice of Spice then you know they've been putting out some really cool sh*t but a flexi?! Yes, they actually took it there and did something a little different than the normal promo 7". If you haven't gotten one by now then your probably shit out of luck with scoring one but I'm sure you'll catch one on the secondary market for $300 somewhere in the future! 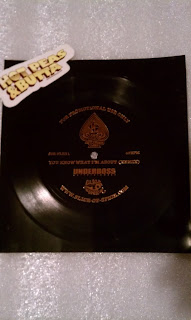 Be sure to check out future Slice of Spice releases.
http://slice-of-spice.com/
Posted by Skeme Richards at 4:20 AM