Going through the crates today and stumbled across this 12" which I never hear anyone mention nor do I see if pop up. Maybe it's a Philly thing and no one outside of this city was up on it back in 1985 when it dropped. The 12" I'm speaking about is from the Korner Boyz aka Grand Tone and Parry Pee featuring their DJ, Jazzy Jeff. This was way before the Fresh Prince days (which I will be posting a few early Fresh Prince basement tapes in the future). 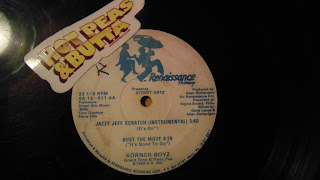 The one really fresh thing about this 12" is that Grand Tone and Parry Pee's line says something to the effect of this ain't Cosmic Kev or Cash Money, which is how I remember most of the Hip Hop back in the day where people got mentioned on wax, none of this subliminal dissing. Everyone knows who the legendary DJ Cash Money is but for those that don't know who Cosmic Kev is, lets just say he was the man before alot of other DJ's became the man in Philly.