Tale Of The Tape

Welcome to Tape Tuesdays! From time to time I'll pull out the random cassette from yesteryear and put a snippet of a classic gem.

Spent a few hours going through boxes of cassette tapes which ranged from tapes recorded from radio shows, Hip Hop cassettes, 4 Track SMPTE tapes and the occasional never seen the light of day promo tape of an artist that never got a proper release. Today's post is about a promo of the "Ya Don't Stop" (EMI 1991) album from The Jaz which was a quality listened from side a to b and featured production from a few heavyweights such as The 45 King, Prince Paul and Large Professor which in my opinion bring some of their best of all time. Lyrically at that time Jaz always seemed to come correct flipping the various styles and flows and you can definitely tell where Jay Z got his whole style from.

Some years back EMI England pressed the album on vinyl (once again a promo only) but it would've been nice to see a widespread release with a video or other promo to go along with it. I remember copping this promo from the record store and constantly banging it in the whip while cats didn't even know what time it was. This album definitely could have held it's weight against the other early 90's Hip Hop albums that dropped back then, maybe Jaz's career would have turned out a little different. 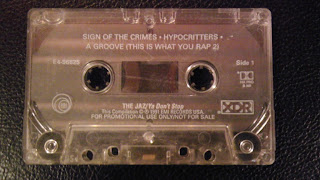