I consider myself of collector of many things and although I have a ton of tapes ranging from radio show recordings, promos, demos and store bought I don't classify myself as a tape collector. I haven't purchased a tape (besides the occasional blank)since probably 92/93 so what I have is what I have and though I see a few while out diggin I just can't bring myself to purchase them.

While going through the stash I pulled out this NMS 92 (that's New Music Seminar for those that don't know)which showcased one side as Def Jam East and the other the short lived Def Jam West. I'll stick with the East side because honestly the only person on the West that you might remember is Boss and the rest never made any noise or impact. There's a crazy story about Boss that we heard back in 91 while in the Def Jam offices shopping a deal but I'll save that for a later post. Anyway, the few gems on here are Onyx "Black Vagina Finder" which is how I first heard Onyx, way before "Throw Ya Gunz" dropped, Redman "How To Roll A Blunt" another track that I heard and knew he was going to be the shit before his album dropped.

Other tracks included EPMD "Crossover" (Trunk Mix), MC Search "Hear It Comes", Nice & Smooth "Cake & Eat It Too" which are all bangers. I really miss the days of buying records from Def Jam and knowing that it was going to be something good if it was on an RAL (Rush Associated Labels) 12". The days of going to the NMS and getting promos like this with a bunch of artists that eventually became household names is over.

Long live the cassette as I knew it! 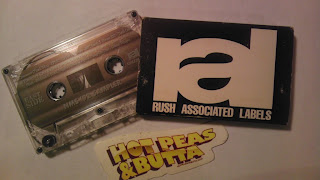 Posted by Skeme Richards at 2:54 PM

I remember that tape tape. I was on my rounds as a emcee , promoter and agressive hip hop back packen \street guy. those were the days . Still in motion. Good blog today homie.

Peace! Thanks for checking it out. Definitely the good time indeed.