So last night was the jump of for my new monthly party along with DJ Cash Money in Brooklyn, NY called "Hot Peas and Butta". All funk, soul, and rare groove 45's. This is definitly gonna be the party to keep you guys warm throughout the fall and winter time. So after rockin in Brooklyn is was back to Philly to catch my 7:25am flight to the place that I love so much, Portland Oregon to spin at the "Heavy Rotation" party tonight and then Juice Jam '08 tomorrow. Porland is definitly the spot for Kicks, burgers and all things refreshingly lovely! Pics when I return back to Philly on Monday.

I want to thank everyone that continues to read my blog, your support is greatly appreciated!

São Paulo-based reverse graffiti artist Alexandre Orion removes built up dirt and grime to create his shockingly complex imagery. Yep, these skulls are actually the cleaned walls of a tunnel in São Paulo, Brazil.
Challenging perceptions about the definition of vandalism and art, reverse graffiti really gets us stoked: both for art and the environment’s sake. Not everyone agrees, however. Peep this video below and watch how some Brazilian cops react to Orion’s “cleanliness.”

So Im half way thru the home remodeling projects, most of the walls are painted but I still havent started putting a fresh coat of polyeurothane done to give the hardwood floors that "Madison Square Gardens" finish. But I've decided to hang / rehang a few pieces back up on the walls. One piece thats in my living room is a rare framed Turkish version of Jimmy Wang Yu's film The One Armed Boxer" Now I know your saying to yourself a movie poster??? Stop right there damnit! Education time. A lady friend stopped by the house yesterday to admire my skills when it comes to doing home improvements which got her approval but she says "we need to get you some art" So I began to give her the rundown of the "art" of rare and vintage movie posters. Here's a brief history, movie posters before the mid 80's were all done by artists (unlike later movie posters that are photographs taken from the film), these posters were drawn or hand painted and took time to do. So basically these could be canvas pieces but instead represented movies, especially the foreign versions. Go back and look at films such as the original Star Wars (1977), James Bond films (60's-70's), Japanese versions of Godzilla, Mothra etc. Blaxploitation and other genres then look at the detail and craftmanship that went into it. These foreign version go for big bucks if you can find them and I've collected a nice amount of them in the stash still waiting to be framed. Props to my man Lance who actually broke down some of the techniques used in the art process to making some of these great pieces. So remember anything can be art if you see it as so.

And speaking of art, there are three artists that I would love to have pieces by them hanging up in my crib, Ewok (http://blog.mr-ewokone.com/)and a self portrait by my man Sake from San Diego (http://thesaratogasake.blogspot.com/)and original X-Men comic art from artist John Byne (80's).

So this week is art week!
Posted by Skeme Richards at 3:26 PM No comments:

While we're on the subject of art, just saw that Juxtapoz magazine is doing an entire issue on NYC graff. There's something about oversized canvas graff pieces hanging up on your walls, especially if there by legendary cats such as Dondi, Zephry, Seen, Blade etc.

Look for Juxtapoz’s 2008 September issue to hit newsstands as the art magazine dedicates an entire issue (and what could have been many more issues) to the world of New York graffiti. A list of some of the Big Apple’s most dominant players are featured including Seen, Quik, Ket, Haze, Ghost, Crash, Freedom, Cycle, Lady Pink, and Revolt. Furthermore, there are articles with Jest of ALIFE, Krink, Cope 2, Claw Money, West One of Supreme, Mare 139 and SP.One. Two covers were produced with Seen producing the general release cover while KR doing up to the subscription version. 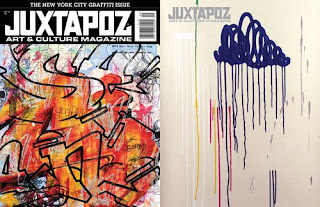 Posted by Skeme Richards at 3:17 PM No comments:

Skate art is some of the flyest shit!

This past weekend featured the opening exhibition of the skateboard art-related show, SK8OLOGY presented by ISM. With such a strong connection between art and the skate deck as a canvas, over the years a large culture has developed on this concept as numerous artists and pros donated boards for the exhibit. A list including Craig Stecyk, Nathan Pratt, Steve Caballero and Danny Gonzales, Jason Lee from My Name is Earl and Mike Shinoda of Linkin’ Park as well as international roster of artists including Audrey Kawasaki, Amy Sol, Chet Zar, Luke Chueh, Pearl C Hsiung, Sandow Birk, Tessar Lo, and Yoskay Yamamoto all had a hand in the exhibit (full list of contributors seen here). The next stop for the tour is San Diego’s Action Sports Retailer Trade Show from September 4-6 and then the Surf Expo, September 12-14. Proceeds from the event will be donated to Now That You Know, a non-profit organization which benefits girls from developing countries looking to fulfill their ambitions. 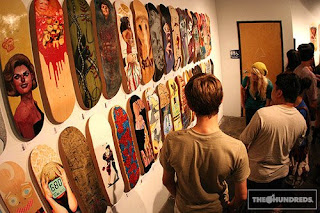 Posted by Skeme Richards at 3:13 PM No comments:

Damn, Im on this when it comes out! The second trailer for Will Eisner x Frank Millers "The Spirit". You need to watch this in HD, this clip doesn't do it justice. Samuel Jackson always has the best roles and the chicks are on point!

Posted by Skeme Richards at 2:11 PM No comments:

For the majority of the people that are clueless and followers! For those that are into the same typical shit, listen to the same garbage ass music and buy the same wack fashions and even worse, rock it the same exact way, you fucking clones! Thank you for making people with their own vision look like the oddballs in life but remember, everyone stares at the oddball and in 5 years when you finally decide to stop being trendy you'll be like damn, Skeme was up on some other shit back them, he's a fuckin' genius! You've got these celebs rockin shit in their own fasion and then you got everyone else trying to be like him or her, it only looks good on the originator of that style!

Thank you world, but no thank you!
Posted by Skeme Richards at 12:21 PM 1 comment:

No not really because I've been working on alot of things plus trying to do some home improvements, painting, refinishing my hardwood floors etc. So forgive me for not supplying you with the daily reads, but fear not I'll be hitting you on the reg soon enough. 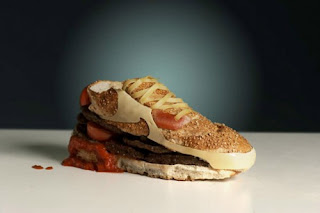 Nike Sportswear has commissioned 8 high-profile creatives to interpret 8 different Nike Sportswear icons. Creative director Olle Hemmendorff was chosen to do the Air Max 90, and without a doubt, he took the shoe to another level that makes us all drool with desire. Hemmendorff transformed the shoes into a burger with cheese accents and meat patty sole. These sneakers are probably as fresh as they come, but the question remains, does he only make them when we order it?
Posted by Skeme Richards at 4:28 PM 1 comment: