Two years back we curated a gallery exhibition / party during the Tribeca Film Festival week in New York City for the premier of the film Black Dynamite. For this event we showcased pieces from my collection to keep it in theme with the film and how the "blaxploitation" genre influenced the movie.

Well we're curating our second exhibition next week in the Netherlands on a similar subject. This time we will be exhibiting several Hot Peas & Butta original works, as well as video and inspirations, they will be covering topics involving the ideas behind Hot Peas & Butta, the influences of cult/exploitation film, 60s/70s television, comics, and martial arts on bboy and hip-hop culture, and how the music is directly connected to those influences. 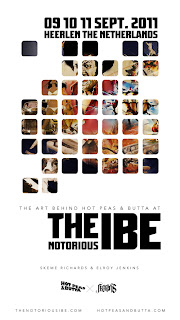 Posted by Skeme Richards at 9:39 AM