Since Im in my classic cinema mode here's a little something that looks to be really fresh coming up. Its called TokyoScope and its happening in San Francisco, I'll be venturing out there next month for Hot Peas and Butta so hopefully I'll have some time to check it out. And hopefully you've already checked out the Sesion31 Presents: Watch For The Fuzz OST that I posted up, let me know what you think. 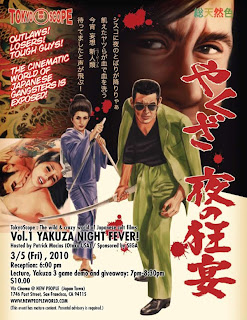 Patrick Macias is kicking off a new lecture series, “TokyoScope: The Wild & Crazy World of Japanese Cult Films,” at the VIZ Cinema in San Francisco early next month.

The first volume, “Yakuza Night Fever,” will focus on Japanese gangster cinema, with Macias’ hour-long lecture tracing the history of the genre, packing the presentation with clips from classic yakuza films.

The event will also feature demos of Sega’s upcoming PlayStation 3 title Yakuza 3, with the sneak peek being followed by a draw of 10 copies of the game.

Sounds like a dope event. Ever seen anyof the Yakuza films by Kinji Fukasaku? Really great stuff, especially the "Battles without Honor and Humanity" series (called "Yakuza Papers" in the states). For the "gangster/mafia" genre it definitely rivals the Godfather.

Just picked up a few of those flix, gonna watch them in the next couple days. Good looking on the recommendations!