I'll be in Houston Tx this weekend celebrating my peoples from Havikoro's 10yr Anniversary. In addition to rocking their anniversary Jam I'll also be spinning the after party called "Dope". This party is 2 rooms of House and Hip Hop and Im feeling in the mood to rock a strictly House set for the evening (which I dont get to do often)so I better gather up those classic 12" and pack my bags. I also just found out that my Philly cousin and DJ King Brit just spun one of their parties a few months. 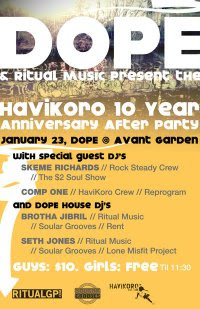 We ♥ DOPE
Commin' at you every fourth Saturday of the month!