So my man AJ Rockin sent me this pic, he said he was in a coffee shop in Korea and picked up this magazine to read it and bang.... a pic of Skeme Richards. This is from a party that I did in Seoul called Bunker at Times Square. I had probably just finished my dj set and was wildin out and about to introduce Rakaa from Dilated Peoples to the stage. I gotta get me a copy! 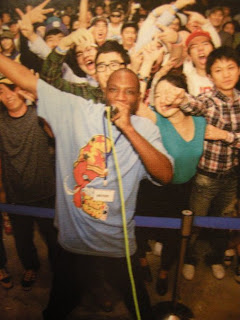 Update! Just found the pics is from Bling magazine. If your out in Korea get it for me!!!
Posted by Skeme Richards at 12:54 AM