The economy seems to be good for some and bad for others. Last week I posted about another comic that sold for a decent amount, this week it seems that Action Comics #1 which is the first appearance of Superman has sold for a cool mill making it the highest selling comic of all time.

There's only 100 of these comics known in existance but this one rates at an 8.0 which is one of the cleanest copies around. 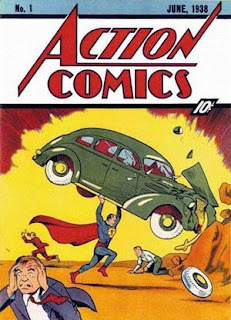 Posted by Skeme Richards at 4:28 PM

I've held one of these in my hands, Skeme. It wasn't in the best of shape, but my uncle has it. It was his dad's. I got boat loads of old comics, too.

Holding it in any condition is incredible. Looks like the collector status runs in the family.

Yeah, but my uncle just collected comic books and not much else. He's got the first appearances and first issues of practically every Marvel super hero.