I've been a video game lover since the days of Pong and since the beginning of Atari Corporations nice run with the 2600 I've had, actually still do most of the consoles ever made.  The one system that was so necessary to own back in the early 90's which most people couldn't afford the console, let alone the $200 & up price tag on the cartridges that went along with it was the awesome Neo Geo.  So it's great to see that the company will be releasing their 20th Anniversary Neo Geo Gold system with a handheld device later this year.

The system comes pre loaded with 20 games including a fan favorite Fatal Fury, and all for $200.  Yup, I'm on it. 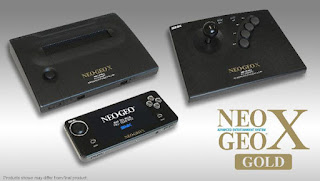