If your in San Fran this weekend here's a little something thats worth checking out.

TokyoScope Talk Vol. 3: WAR OF THE GIANT MONSTERS 5/7 in SF

For this show, August, Tomo, and myself will be showing our very favorite moments from Kaiju film history, making for a giant monster sized greatest-hits package in the process. We will be giving away pre-release copies of Shout! Factory's new Gamera: The Giant Monster along with some other goodies.

Why giant monsters this time? Well, NEW PEOPLE has a killer announcement that I don't want to spoil until they give the green light. In meantime, look for a press release and more updates as they come in. 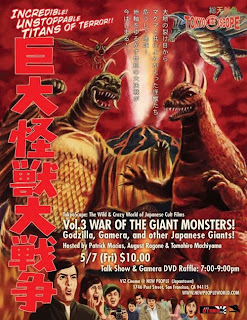 Posted by Skeme Richards at 3:20 PM

Damn, this sounds like a good time, Skeme! Will there be any clips from 'Gork Eats New York'?

Seriously, though, wish they had this kind of thing on my side of town!

Your telling me. We need this in here in Philly or at least do it in New York!

I'm down for either one of those venues. I go to NYC regularly (well, not much this year so far), but Philly is a bit closer.